A taut, suspenseful film, based on true events, about a group of soldiers who need to secure an area in Gaza while their colleagues collect the remains of Israeli soldiers who have been killed in an ambush. Michael, the squad commander, positions his troops in a house populated by a Palestinian family. The platoon is accompanied by a military photographer who complicates the situation by questioning their behavior and posing a security burden through his reckless actions. As their stay in the house is prolonged, tensions boil.

A film by Eliran Elya

Produced With The Help Of: The Second Authority For Television And Radio Information, Eli Gelfand Fund Support, The Cameri Theater. 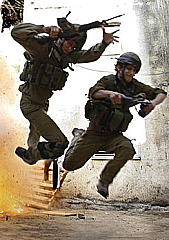