Communities in a New Light - Oslo

The story of the Jewish community in Oslo

Almost two million people live in Norway's capital Oslo. Among them, its tiny Jewish community of only 750 is making every effort to preserve its Jewish identity. Rabbi Yoav, the son of former MK Rabbi Michael Melchior and leader of the Jewish community, is trying to find a way to keep the Jewish community alive at almost any cost: "Some people eat pork and come to the synagogue too," he says as he illustrates how far the boundaries are sometimes stretched.
Yuval, Etti, and Cecilia are three of the young leaders of the community. Yuval was chosen to lead the religious-Zionist Bnei Akiva movement despite the fact that he is completely secular, Etti is a Jewish teacher and the daughter of assimilated parents and Cecilia is a well-known stand-up comic who grew up in the community and comes back to give hilarious performances once a month. They, unlike their parents who chose to distance themselves from their Jewish identity, are closely connected to the Jewish community and are trying to strengthen and preserve the now weakened Jewish ties.
It is an uphill battle because living as a tiny minority presents daily challenges and undermines the Jewish identity of the younger generation. Will the small Jewish community of Oslo succeed in overcoming the difficulties and bring up a generation that feels connected to its Jewish identity? Are the boundaries of Jewish law being stretched a little too far? This film about the Jewish community of Norway is the story of a tiny Jewish community fighting for its future.

A film by Golan Rise 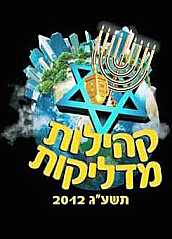